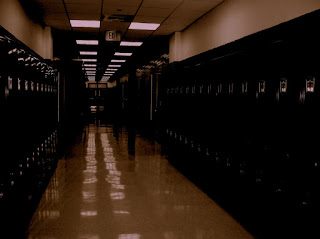 He passed an open lab door. At first, he didn't hear the sound, still engrossed in his own thoughts. Then some primitive part of his brain slowly woke up and started ringing alarm bells. Something that sounded like a moan reached his ears.He looked around warily. Shit. What on earth could be making that noise? Ashamed to be this scared at the ripe old age of 73, he shook his head clear and stood still. Listening. First nothing. And then came a guttural sound. "Uhnnn Uhnnnn". Followed by rustling.
Shit.Shit.Shit. It was coming from the open lab. He stood there, paralyzed, staring at the lab door.From where he stood, he could only see a thin sliver of what was inside.
A clanking sound, like something metallic hitting the floor.Roy jumped, his old heart pounding.
Again, "Uhnnn Uhnnn Uhnnnnn". Louder, more urgent.
An unexplained feeling of dread rose inside his chest. He glimpsed around, irrationally hoping for somebody else to appear - a teacher, a staff member. He'd even take those lanky older boys, who always smelled of weed and cigarettes. But it was past midnight and even those deadbeat kids would be safe in their beds.

Roy looked down at his shoes. Drops of sweat had landed on the old leather. His chest wheezed painfully. He placed the mop against the wall, careful not to make a sound. Then leaned against the same wall and slid slowly to the edge of the laboratory door.  He moved fast, pivoting around the edge of the open door.

The room was lit, but not by the overhead fluorescent lights. There was a dim yellow glow coming from under the large table in the middle of the room. He stepped closer. There was a large sheet draped over something on the table. He frowned, unsure of what he was seeing. "Unnhhh Unhhh".It was coming from the table.

Roy was a fan of cinema. He had watched enough movies, and he knew better than to go closer to that table.
But his feet wouldn't listen. So he got closer. And closer. The faded yellow sheet was still. Minutes passed.
And then the sheet rustled. And moved down the table. A stiff, rigid corpse lay on the table.
Before Roy's brain could process that, the cadaver turned its neck and looked at him with dulled, sunken eyes. Its mouth opened, toothless, decomposed. A pungent odor of formaldehyde hit his nostrils. His breath seized in his mouth and his bladder voided involuntarily.

Then three things happened in rapid succession. First, the corpse stumbled off the table with surprising agility.
Then, Roy's already overburdened heart gave one last terrified thrust and died on him. Finally, the corpse scampered to his still body and took blind, hungry bites out of his still warm flesh.

The rest of the night passed quietly. Punctuated by moaning and slurping sounds. Then more silence.

At five in the morning, the other Janitor walked into the building. Accompanied by two lanky boys, who smelled of weed and cigarettes. They tiptoed, quietly to the lab door. Peeked in and saw the remains. The dissection table was empty. Following the trail of blood, they found the cadaver in the back room. They stared long and hard at it. No movement. Still and dead.The only noticeable change was a slight bulge in the abdominal cavity.
The Janitor let out a stifled curse. The two boys gaped. After a few minutes, they wordlessly resumed their routine. They picked up the slightly heavier corpse and carefully placed it in the assigned drawer. Locked and double checked the lock. IT wouldn't need to feed for a week more.

Then the boys picked up the mangled skeleton in the main lab and stuffed it into the large incinerator, eyes red-rimmed with weary fear.