This past week, our house underwent some fumigation and so we spent 8ish days at our in-laws’ cottage in Monterey, California. For those unfamiliar with that part of the world, Monterey and its surrounding towns are right next to the Pacific Ocean. Miles of beautiful, unspoiled beaches, not too touristy and of course the world-famous Monterey Bay Aquarium. The weather is never too hot; the beaches are set against a backdrop of lush hills and the sand is always perfect. My idea of heaven on earth.

The kids had lots of fun, but because of a sudden increase in downtime (no school) they started having bouts of “I’m so bored/I love the Ocean/I hate the Ocean/I’m angry for no reason”. Typical younger child behavior and something I’d expected would happen. They both thrive on structure, so we tried to keep things as streamlined and predictable as possible.

Of course, my Zen, earth-mother mood didn’t last too long. Between the cooking and cleaning and general child rearing, I started whining and moping as well, by the 3rd day. “Why can’t I sleep in/why can’t I have a moment of quiet/where’s my ice cream for good behavior”. You know, the usual annoyances, every single one of you has had.

So my husband, being super attuned to my thought processes, decided to intervene. Kids and I had just settled down after a particularly pointless 3 person tantrum. Husband sat me down and said he was giving me a timeout. (Yes, I did a comical double take on hearing that). He wanted me to take an hour off every day, at a time of my choosing and go sit at the beach. So essentially a break from life and responsibilities! He was wearing an old gym shirt and ratty shorts, but hot damn, the man had never seemed more attractive to me than right then! A long smooch and whispered thanks later, I was off to the ocean, with my trusty laptop and a cold latte.

I soon discovered a sheltered corner, hidden from the highway that runs parallel to the ocean. Because of the sand dunes, this little alcove was partially protected from the wind while still offering a pretty spectacular view of the sea. And that’s where I sat my butt for the next 5 days, breathing in the air and watching the roiling waves.  One particularly cold evening, I took some ice cream with me. I settled down on my beach towel, careful, not to attract the attention of the beady-eyed seagulls, who were pretty liberal about eating anything that will go down their beaks. A couple of bites in and an incredulous voice floated over to me, from the next dune over. “Are you really eating ice cream? In this freezing weather?”. I nodded and smiled at the old man, who then cheekily asked: “Do you have an extra cone?”.

I went to the beach during different parts of the day, but the sunsets were by far, my favorite. Sunsets anywhere can be incredibly beautiful. But there’s something particularly mesmerizing about watching the sun grow heavier in the sky before slowly shimmering and melting into the heaving ocean.  Seagulls flew across the horizon, skimming the surface of the water before yelping as the cold spray hit their wings. Cars pulled up near the edge of the beach as people got off to take in the end of the day. I heard myself relaxing, each exhalation taking away another ounce of stress and worry. Much like those seagulls, I felt lighter and carefree.Around me were men and women, of all races and ages. Old folk, young lovers, harried parents and squirrelly kids. All staring at the ocean, the sun gloriously reflected a millionfold in their wet eyes. Some people openly cried at the beauty of it all, while the more stoic ones, wiped their eyes and stared straight ahead. We were all literally 20 feet away from the highway, but it felt like a completely different world. For some perfect minutes, we were silent spectators, watching the greatest show on earth.

The ocean represented something different for each of us. Some saw the waves and remembered childhood summers, sepia-toned and magical. Others thought of gravitational currents and riptides, and the sheer vastness of the blue world ahead of them. Me, I thought long and hard about solitude. And calm. As a parent and wife, somehow I had bound every second of my life to someone else. I started getting used to being constantly needed and sometimes, it was so easy to forget myself in all the chaos. So I looked at the ocean and realized that it is ok to have some alone time. No guilt. No regrets. The occasional need for solitude was perfectly valid because every moment doesn’t have to be with or for someone else. I needed to feel the warm sand underneath my toes, both lifting my spirits and grounding my soul.  And I was blessed to have a husband who somehow understood this before me. And just like that, I unclenched my jaw and the last bit of stress flew away.  No matter what curve balls life throws at me, I will always have these evenings with me - crisp memories that I can access anytime I want.

It was almost sundown. I saw lots of phones and cameras out. Trying to capture the beauty before us. Uncharacteristically, I didn’t feel the need to reach for my own. No picture or video could ever capture the beauty of what I was seeing and somehow I didn’t want to dilute this splendor with a picture. So I leaned back and listened to the haunting roar of the waves. I felt peaceful, almost hypnotized, cleansed and recalibrated.
A smattering of applause and I realized the show was over. The sun was now a liquid pool of golden on the horizon. Cars were already revving their engines, ready to leave. United by Mother Nature, for a long moment, a hundred different people now departed on their separate journeys. Each of us would take home a different memory of this evening. As I walked back to my car, a twinge of stress crept back in. Did I remember to cook the macaroni? Was the trash taken out? Had the kids gone completely feral
But now, instead of denying that anxiety or wishing it away, I embraced it fully. You see, your entire day doesn’t have to be this constant parade of successes. It is unrealistic and frankly tiring to expect perpetual happiness. Instead, I would treasure the little pockets of joy that came my way. Like my son who learned to ask Wh-questions for the first time.  Like my daughter who told me that I was ‘her favorite goose’ (?). Like my husband, who somehow knew how to fix me. And like that blue, hypnotic ocean that fixed me.

My cell phone buzzed- Husband checking in to see if I was ok.


And I was. I actually was. 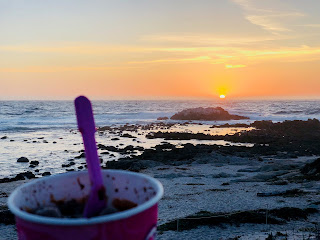