My daughter and her friend.

We had an interesting look into human nature, last month. My son, Nirav had gone up to San Francisco with his dad, so Reya and I hit all the local fun spots. Library, Food truck, Ice cream, Park.

It was close to 5 pm when we get to the playground. There are 3 swings. A baby coos at us from the bucket swings, and smiling delightedly, Reya hops on the vacant one. Next to us, on the last swing sits an older boy. Well, young man really. Probably in his early twenties, with a handsome face and the greenest eyes I’ve seen. He’s humming to himself and doesn’t respond when Reya squeaks hello in his direction. On deeper inspection, I realized that he is chanting softly.

He goes on and on.

Odd? Well, depends on your definition of the word. I had spent half the day, talking in a Cartoon voice to Reya, so we’re no more or less weird than this angelic-looking dude.

After a while, Reya just like him, possibly because she thinks this is a game. The man (boy?) looks at her, startled and immediately starts rocking on his swing. He’s visibly upset and sensing his discomfort; she stops. She stares at me with big eyes, and I look back. The same thought floating in the evening air between us.

Because of Nirav’s autism, as a family, we’re very sensitive to not just his challenges and triggers, but also those of others like him.Children always watch their grownups and . Reya is barely 5, but she already knows to respect those different from her and not use hurtful labels.

She mouths “Sorry” to me and I nod. Maybe later, if the man is receptive to it, she will apologize to him.But for now we chill there, singing, talking and respecting the privacy of the man as he works through his upset emotions.

A little while later, Reya hops off and runs to the Slides, where she spends a merry half hour tiring herself out. I’m chuckling and quietly checking my Facebook, when this  Indian lady plops on the bench next to me. I nod politely, and notice she has this conspiratorial look on her face.

Ugly gossip, I think and I am not wrong.

She leans into me and whispers in broken English.

“That man. Is mad. Don’t let your baby sit on swing nearby him.”

I gawk at her, noticing her pretty face distorted by a sly know-it-allness.

“Be careful. He singing and talking all the time. Scaring my baby.”

I look at her “baby” - a rather boisterous 6-year-old girl.

“Last week also he is at park. My baby say he always on . Why adult on swing? It is children’s park, no?”

Her loud “baby” is shoving a toddler, so she can have a turn on the slide. I want to retort, but I don’t, because this woman talking yet.

“Scary no. Babies come to play at park.This is not right.”

I am usually a calm person. Non confrontational and mind-my-own-business. But something about her self-righteous tone sets me off. I want to scream, but what sort of example am I setting then? Children always watch their grownups and

“That man on the swing is my friend. He has Special Needs, not that it’s your concern. In the hour I’ve been here, I haven’t seen him disturb anyone. He chants to himself, because that’s how he copes. He possibly swings for hours, because it helps him regulate his body. He is not Mad or weird. And he’s not scary.”

My face is flushed, and there’s a slight hitch in my voice. Reya is watching, as are a few people from the next bench over, but I’m exhausted and suddenly furious.

“If you’re so bothered Madam, why don’t you go elsewhere? It’s a free country and honestly, the playground would be better off without this kind of unpleasantness.”

She gapes at me, before getting up in a huff.

Pinky is throwing mud on the slides and making a few enemies of her own. She does not turn around.

I get up and walk to Reya. She hasn’t heard everything, but she knows something went down. She kisses me on my head, maternal and soothing. I breathe in her little girl smell, and that calms me down some.

The rest of the evening goes by smoothly. The lady is nowhere to and good riddance.
Reya asks for the swing again and she’s soon next to the Man with the green eyes.

He goes on counting - one number for each completed swinging motion.

An older man walks up beside us. Tall and handsome, he’s the spitting image of his son on the swing. He grins and wiggles his fingers at Reya, who immediately tells him her name and full address. I nod politely and we stand there in companionable silence.

“Stevie, you about ready to go home, buddy?”

He gets off the swing abruptly, looks in our direction and mumbles.

Delighted that he knows her name and mine too, Reya shouts "Bye friend!

The older man looks confused but pleased. He nods at us and runs to join his son who is already halfway out of the playground.

I smile at their retreating backs, warm in the beauty of simple interactions, laced with genuine respect. The green-eyed guy was listening to our every word and I hope he found us to be a calm presence.

We live in a world far too complex and full of thorny hatred. Acceptance of those different has come a long way. We don’t point and talk when we see kids with Autism. We spread awareness about Down’s Syndrome. We pause before using words like “mental case” and “retard”. All of this is wonderful and gives me hope.

But these little kids with Autism and Cerebral Palsy and Down’s won’t stay kids forever. They’ll outgrow their baby fat and rounded shoulders and become adults with the same diagnoses. Will we still respect and stand up for them?

The man on the bus who sits on the same seat every day. The girl at the mall who wears special braces to help her walk. The boy who is almost 40, but still enjoys nursery rhymes. , and so many others who need a little extra time to process, to speak, to understand, to respond. They’re men and women, flawed and perfect, like you and I. But they can’t walk this journey alone.

Nope, not true. They are not like us. They wake up in the morning and fight a hundred battles by the time most of us have our first sip of chai. Their challenges are hard and real and often about little things we take for granted.

So let's do away with the whole “We are all the same!” slogan, because that is not helpful. It comes from a good place, but it diminishes the true struggles that people face.

By recognizing our differences and lending a respectful hand, a compassionate ear and an accepting smile, we have the power those with Special needs.

As for us, we’ve been to that playground many times since. Stevie is 22 years old with Autism. He loves chess and swimming and is starting a Software Internship with Apple in August.

Reya has learned to count beyond 1000, just by swinging next to him and he doesn’t mind now if she chants along occasionally.

And God bless him, but he legit thinks my name is Amma! 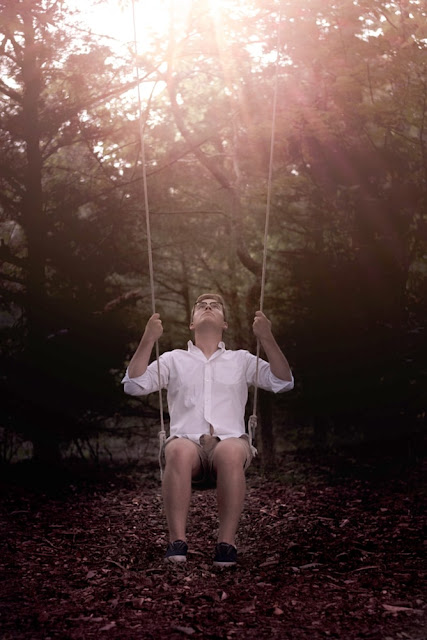