The Latin name was Mimosa Pudica. Slender and prickly, the Touch-me-Not plant was a loner. But with enough shade, and the right kind of soil, the little fern often sprouted delicate flowers. Purple pink and florid, these blooms were a pop of joy, a rosy smile on an otherwise lonely facade.

It was late evening when the lorry rumbled down the muddy roads. In the driver’s seat, Lajwanti sneezed and flicked away an errant blade of hay. Her throat was dry and her eyes burned from glaring at the sun all day.10 more kilometers, and then a bathroom break on one of those dirt roads that meandered off the highway. She also needed to use the PCO. After 13 hours, he would expect an update.

And sure enough, after a quarter of an hour, she spotted a little muddy track with a PCO sign next to it. KalamBhai’s voice boomed inside her head. “Remember, you cannot get caught before you make the exchange. That would end of the whole operation. We have 70 crores at Stake!”.

So signaling appropriately, Lajwanti exited onto the dirt road, grimacing as the lorry creaked over bumps and potholes.

Half a kilometer down was an abandoned fuel station. And right in front of it - a rusty PCO booth. Lajwanti parked behind the building and watched silently with a hand on the lorry. As far as she could discern, no one was following them. All good.
The Lorry’s engine wheezed and rattled before falling into a humming stupor. She couldn’t hear a sound from the back, either. Maybe they were all sleeping. Well, a busy night ahead lay ahead of them, she thought with a grimace. She’d refilled their water a couple of hours ago and left enough food. But she couldn’t risk opening the lorry and checking in. Any racket would put the whole operation into risk. And she absolutely couldn’t have that happen.
Tiptoeing, she reached the PCO. The handset was old and mottled, but the phone was thankfully in order. She punched in a number and waited.
A burly voice answered. “What’s the status?”

“All good. We’re making good time and I expect to get there soon.”

“No problems there. In about half an hour, I should be reaching the old well. Remember, the plan is to wash the Cargo before the exchange. After that, it’ll take me less than 10 minutes to get to the Main Gate of the house.”

“Good! Good! And are you being followed?”

Lajwanti hung up the phone and sprinted back. Heart thumping, she swung the lorry onto the road and drove at a rapid pace.

A little while later, she saw the familiar rice fields, swaying on either side of the highway.The end was nigh! 70 crores- whew! No small number!
But she didn’t smile. Not yet. Not just yet.

The Paddy fields vanished, replaced by a dense thicket of low trees. An askew sign, advertising Bean Bags and Pottery jumped up on the side of the highway. Lajwanti took a deep breath and signaled left.
(“Wash the cargo, Lajwanti. They need to be clean for the Europeans.”)

Acid bubbled up her throat as she spotted the old well and the hose behind it.

She jumped down from the seat and walked to the rear of the Lorry. Unlocking the back doors, she opened them wide.
Silence. Then she got out a ring of keys from her Uniform coat and crept into the lorry.

Lajwanti readjusted her shawl and jumped back outside.
Then like a ringmaster, eager to begin, she boomed.
“Come on. Come on. One by one. Step outside and form a line here by the well!”

At first nothing. Then 24 pairs of unsure legs slowly crept out of the lorry and stumbled over to the well.
Lajwanti let out a low chuckle. Everyone was accounted for. Perfect. PERFECT!

And that’s when all hell broke loose.

Lajwanti, stood by the lorry, eyes wild. Before she could say a word, an assortment of officials descended on the scene - policemen and policewomen, doctors and nurses. The kids were given thermal blankets and cups of juice while nurses fussed over their heart rates and searched for wounds. Absolute chaos reigned for a few minutes until a uniformed policeman stepped forward and raised a burly arm in the air.

Every single face followed him as he strode over to the lorry, gun in hand. Thin lipped and with a mad gleam in her eyes, Lajwanti stood, cornered.

Inspector Veer Scindia stopped a foot before her and raised his gun. In the distance, one of the children began sobbing. Scindia looked at Lajwanti, taking in her scars, her battered face, her wispy hair pulled into a severe knot.

Then saluting smartly, he shook her hand and handed over his gun.

In a soft voice, quite unlike her usual grunt, Lajwanti asked,

“Are the children ok?”

“No bruises or signs of abuse?”

“Absolutely none, Ma’am. You’ve done very well to protect them, given the circumstances.”

“Well, we all know the next step then. Keep them safe in custody and slowly release them to their parents over the next two days. Handle everything with the utmost discretion. No Press and absolutely no Tamasha! We cannot afford any publicity this close to the finish line.”

“Understood Ma’am. Is the GPS tracker on?”

“Trackers. Plural.The idiot put one in the truck and one in this Coat. I’ll dump them at the house, so he doesn’t suspect anything.”

As Scindia nodded, Lajwanti walked over to the children, now huddled together in ill-fitting toasty jackets. She dropped to her knees and looked each one of them in the eye. Then after a good, long minute, she spoke.

“Much like you, there was a little girl called Sharon Fernandes. When she turned 12, she was kidnapped and sold into a child prostitution ring. She endured years of horror and shame and pain before being rescued during a Sting Operation.”

The children stared at her, agog.

“Now Sharon Fernandes isn’t so little anymore. She grew up, studied Criminal Psychology. Majored in Sex Crimes. Became a policewoman- an inspector. And every day, she fights for children like her. Like you!”

No one said a word. But they all gaped at her. The scars. The woman behind the scars. And the little girl behind the woman.

Then a waiflike boy spoke from the back row.

She chuckled. Stroking the gun on her waist, she replied.

“Kill them? Oh honey, I’ll do no such thing.  I don’t go around itching for a fight. But something tells me, they might not like an empty truck. And remember, at the first sign of trouble, my Propane Torch will do the talking.”

The boy’s eyes widened, but he didn’t speak further.

She paused.
“I want to hug you, but I won’t. You may not care to be touched, right now. But before you go home, the police will give you my personal number. Any time of day, and I’ll be on the other side of that phone.Nightmares, panic attacks, anger. You call me, and I’ll talk you through it. Ok?
Now Goodbye Children. You have a busy night ahead of you. Be safe. Always.”

Some of the older kids cried. The younger ones, yawned. They were children and children are notoriously resilient.

Lajwanti stood there for one more second. She seemed to have some trouble with her eyes.

Inspector Scindia stepped in behind her as she walked back to the Lorry.

“His GPS trackers should show him that I reached the house.I’ll call him right after. And my undercover references were strong. He won’t suspect anything for a few days.”

“Ok ma’am. And you’re sure you don’t need backup?”

“I’m sure Scindia. Don’t forget, there are thunderstorms expected. Now, you wouldn’t want to get caught in the middle of those, would you? I’ve heard these Electrical Storms are bad news. Huge Fire Hazards.”

A furtive glance at her Propane Torch, peeking from the Passenger seat of the Lorry.

Scindia didn’t say a word. He knew better than to question her. Plus something about her general energy scared him.

So he stepped back. Saluted, wishing her luck.

4 Police Cars, 2 Police Jeeps and 3 Ambulances watched the Lorry thunder out of the Clearing. And a second later, she disappeared into the inky darkness of the night.

Firefighters responded to reports of fire from a guest house, just outside Birajpur. The fire was contained to just the residence and did not extend past the Main gate. Unfortunately, several bodies were found inside the basement, burned beyond recognition. Preliminary Post-Mortem Reports indicate the bodies as belonging to Caucasian Males, possibly of European Descent. Firefighters issued a joint Statement with the Police ruling out any possibility of Foul play. “We have had many similar fires in the state recently. Lightning strikes are common during such Inclement Weather Conditions. We intend to close the case as an unfortunate act of nature and extend our Condolences to the families of those who perished in the fire.”

Local Businessman, KalamBhai Verma was the Victim of a Motor Vehicle Accident yesterday, outside Bishop’s Bar in north Salilabad. Mr.Verma was seen exiting the bar in an inebriated Condition and failed to notice an oncoming Lorry. His Jeep was crushed under the impact of the collision.Mr.Verma suffered from multiple lacerations and blunt force trauma, before succumbing to his injuries. Taking into account Mr.Verma’s Blood Alcohol levels, the police have ruled this as a case of ‘Drunk Driving’, and cleared the Lorry Driver, of any wrongdoing. Mr.Verma is survived by his wife.

‘Suraksha’, a leading NGO fighting against Child Prostitution, has received an anonymous donation of 70 crores. The NGO recently made headlines for cracking down on a Human Trafficking ring in Andhra Pradesh. Media Spokesperson for the NGO, Mrs.Pradnya Shinde announced, “We are very thankful to our Anonymous Donor. Suraksha seeks to end the exploitation of Women and Children everywhere, and this generous donation will go a long way in making that happen.”

Deep inside Police Headquarters in Mumbai, sat a corner office. Quiet and with just the right amount of light. And in a cozy part of the room, rested a plant. Latin name: Mimosa Pudica. The Shy plant, the Touch me Not. Watchful and vigilant, the delicate fern was considered more evolved than most shrubs.

Two feet away, at a large desk, Inspector Sharon Fernandes put down the news reports. An absent finger went to her scars- counting them, respecting them. Her jaw twitched as she leaned back and looked at her plant. Something purple pink shimmered under the buds at the very top. Any day now, she thought, as a rosy smile bloomed on her otherwise lonely face.

Shy Plant. Zombie Plant. The Touch me Not.
She was partial to the Hindi name, any day.
“Lajwanti.” 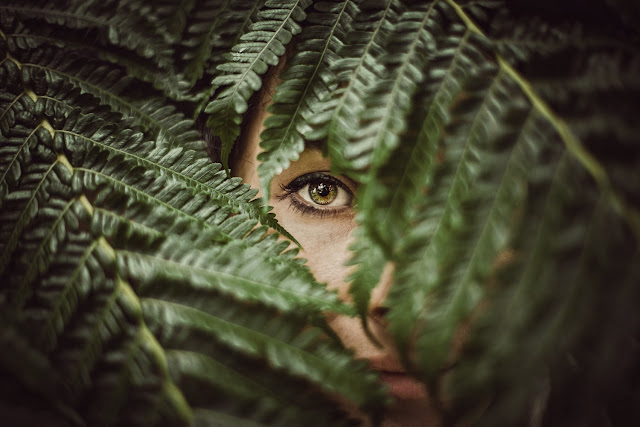