I sniffed, testing the air for their odor, but couldn’t pick up anything above the aroma of rotting waste. My machete waited beside me, an old and trusted friend. Breathe slower, I warned myself. You cannot afford to get dehydrated again.

Close to 5 minutes passed before I heard them. Soft, shuffling footsteps. I placed the machete carefully on the floor and peeked under the car. I spotted the first one a few rows away. And then a second. And a third!

I sat up and cursed. It seemed to be one man, one woman. And a child. Shit. SHIT! I hated killing kids.
But like my mom used to say, “If it is you vs. them, Always choose yourself!”

I grabbed my weapon and waited. Didn’t matter anymore if I could smell them. They would find me soon enough. And they would come.

Just like I expected, the footsteps got closer. I’d killed close to a 100, but it still got me every time. Something about taking a human life, or whatever. My mom would know the right words. She’d been a scientist.

They were almost here. On the other side of my car. That was quick. Wait, something wasn’t right. I sniffed again. Nothing. What was going on?

I was about to stand up and check when I saw them finally. 3 humans. One man, one woman. And one little boy.

I gaped. God help me, I dropped my machete, and gaped like an idiot. I had never seen such a wonderful sight, since, well….. since the world ended and all that.

The man broke the silence first.

“Huh?” I croaked. I hadn’t heard my voice in months now.

I stared at his little face, marveling that he existed.

“Do you have any weapons?” This was the woman (mom?)

“No. Just my machete. Say, how long have you guys been here? You’re the first survivors I’ve seen in 10 months now,”.

The man looked at the woman, a question in his eyes. Then they both turned to the little boy. Who nodded

The woman said, “We have a house nearby. You can come with us. Food, water, some sleep.”

All of those things sounded heavenly.

We set forth; the adults walking ahead while the boy and I trailed behind. We fell into easy conversation and I learned that he was an orphan. He asked me about the large medallion on my neck. It was my mother’s; I explained. She’d died early on. He looked away.

He shook his head. “No, I met them early on, after the world fell. We were a rather large group. Now, just us three.” A faraway look came into his eyes.

I said nothing. I had a million of my own memories. Horrors I’d seen. ‘People’, I’d put down.

After almost an hour on the country road, we reached a tiny village of sorts. I hugged my backpack and shivered. Empty broken houses lined the sole street. The occasional undead corpse, stowed away neatly. All of them had broken skulls. I grimaced. Of all the zombie lore we’d read and seen, this was a rare true one. Aim for their brains, and they dropped right down.

The trio stopped before a house. Obviously theirs. The woman beckoned me inside. After months of sleeping under trees and in old barns, the concept of an actual house weirded me out. Strange how the human brain works right? (Again, my mother would know the reason for this. She was the clever one.)

“Can I walk around for? Just to get my bearings.”

The woman opened her mouth to speak, but the man shushed her.

“ Just come inside before it’s too dark,” he mumbled. “And don’t go too far to the west of the village. There’s a large horde of the undead there, behind the fence.”

I wandered around and poked inside a few houses. Saw and heard the moans of the undead, from the fence at the end of the village. Did my little rituals, indulged in some eccentricities. Kissed my medallion for luck.

When it got dark, I went back to the house. We had a small dinner of stale mushrooms and soup. It was the best thing I’d ever had. I offered to wash the dishes, and soon we fell into a calming routine. I dried the plates while the trio packed their bags and put on their shoes. I understood. After the world fell, it was best to be ready, even at bedtime. You never knew when you had to leave at a moment’s notice. (Always plan - another of my mother’s favorites)

The man came up with a glass of wine.
“Today’s a special day for us. We found you. That’s cause for celebration, right?”
A happy smile on his face. I nodded shyly and took a sip. The wine was delicious. Or maybe it was shitty, but I didn’t care. My mother never let me , so this was a welcome treat.

Sleep came easy that night. I dreamt of flowers and beer. My mom telling me to be careful. That the zombies were getting closer.

I woke up suddenly, with a headache. Must be the wine, I thought before the pain hit me everywhere. Somebody was pulling my arm, painfully. ZOMBIES was my first thought, and I stood up. Only to fall on my face because I had no legs.
My brain screamed, disbelieving. “Help! Wh-what’s going on?” I cried out, in the dark.

He bent back and swung the axe down. I fainted before it touched my arm.

When I woke up again, I realized 2 things. We were outside the house now. And I limbs left.
The trio were whispering, by the front door. The woman kept peering in my direction and the man gesticulated wildly. Only the boy stayed calm. Perhaps, he was in shock?

I wasn’t in too much pain. And somehow still alive. I spotted crude bandages at the end of my arm/leg stumps. That explained why I hadn’t bled out.

The woman walked up. Bent down to my mangled half body and whispered. “We’re leaving soon. Are you in much pain? I gave you a giant dose of anesthetic in the wine. It should have kicked in by now.”

I stared at her through hot tears.

“I’m sorry it had to be this way. If it matters, I voted against this plan. But Raul wouldn’t listen. I’m so sorry.”

“Well…. there’s been talk of this Survivor Camp up north. Just 70 miles from here. But we’re stuck. Can’t move north, unless  of. And we don’t have weapons. Not enough anyway.”

“We needed a distraction”, came a soft voice. I looked up to see Raul. Not the man. The little boy. He stood there, looking at me with his cold, cruel eyes.
“The undead are picky. We tried dead animals as decoys, but they…. prefer human flesh. So we’re using you as bait. Well, different parts of you, scattered across this street. And once they’re busy, we’ll move past them. There’s a river on the other side of the fence. Across that river is the only road north. To the survivor camp. So you see why it has to be this way?”

I understood finally. Their eagerness to welcome me without asking too many questions. I was their way out of his hellhole.

Raul bent low and whispered. “We’ll unwrap the bandages now. Let the blood flow freely. That’ll get them worked up.”

“The medallion!” I gasped. “Let me have my medallion. Put it in my mouth. It was my mother’s last gift. Please, Please let me have it!”
He looked at me with distaste and almost walked away. But some speck of humanity made him turn back. He grabbed the medallion from my neck. I opened my mouth, and he placed it there.

“Oh, I almost forgot!”  He whipped out a small switchblade and sliced my chest open.

Blood poured out as I trembled with agony. But I didn’t cry out. The zombies clamored against the fence, restless and hungry. Sensing a meal.

As my vision blurred, I saw the trio walk to the fence. My mother’s voice sang in my head. “Always plan. Always Plan”.

Raul unlocked the fence door. Then in practiced formation, the trio ran back. Sought cover above an abandoned car. With any and my limbs dispersed everywhere, the horde would walk right past them.
(My mom’s voice - Always Plan. My nightly rituals. My little eccentricities.)

The door creaked open as the first of the zombies staggered in. Eyes sunken, it looked around, snapping its yellow teeth. A dozen more moved right behind -moaning, seeking. Stumbling towards me. The trio waited above the car, ready to escape.

I probed with my tongue and found the little button on the medallion. Then I bit down hard on it. As the first zombie touched my chest, a dozen homemade bombs exploded in series. The fence tore. 4 houses collapsed. The abandoned car erupted in a ball of fire, scattering the bodies of the three Living and countless Undead in every direction.

Always plan, I thought as I gave in to the Zombie. It was their world now. And the last thing I heard was my mother’s rather pleased voice. 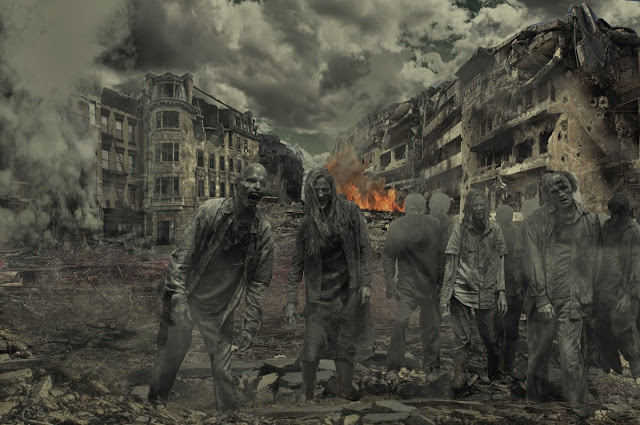