I have always been a wuss around creepy crawlies. Insects of all manner and snakes. Big problem for me. In fact, as a teenager in Mumbai, I often walked past snake charmers and their kind - mostly on Railway bridges and near temples. I took a wide detour every time I spotted a scaly head bobbing outside that wicker basket. To overcome my fear, I befriended a few of the snake charmers and much to my dismay, one of them invited me to touch her snake. I didn’t want to seem stupid. One shaky finger on the reptile and I promptly regretted everything. From then on, I have been a vocal opponent of all things slithering and I have often been accused of being rather a bore on the subject.

The other night, I had finished watching a rather gory episode of the Walking Dead. Gut and brains everywhere and much bashing of zombie heads. Usually I sleep like a fat baby after my nightly zombie dose, but that night I had this intense nightmare. (You know how dreams are trippy? One minute you’re flirting with Ranveer Singh and in the next scene , you’re sitting down for coffee with your weird aunt you haven’t met in years. Dreams are funny like that.) But not this one.

I dream I am living in my grandpa’s house and there was this particularly slimy snake intent on getting inside. Black and vicious, it snaps its stupid jaws, generally making me pee my pants. I was about to shut the door when who walks in- but my husband. He spots the snake and somehow decides it would make a charming pet. He picks it up, and I can see the slime rolling off its skin as it wriggles and undulates. I beg him to reconsider, offering many valid points why it would be a terrible idea to get that snake inside. He ignores me, seemingly in a trance with this idiotic grin on his face. I shriek like a banshee and run away from him, but soon more family members arrive. All of them seem possessed by whatever malevolent force is lurking inside the snake.

Somehow I muster the courage and try to kill the creature, but every elaborate scheme I come up with is thwarted. I weep hot tears and the snake just bares its fangs at me while my husband absently strokes its scales. At a loss for ideas, I fall to the floor melodramatically (shut up, it's my dream so I get to play the star). The snake takes this chance to come slithering towards me.
Moving this way and that, it hisses at me, every single scale rising and falling in a liquid way. That’s when I whip out the hammer hidden behind my back and bludgeon the damn thing to death. Covered in snake blood, I offer its mangled body to my husband, who’s out of his trance and looks at me with growing concern.

The dream ends there and I’m guessing this is where I start to wake up. My hands touch something squishy, and I smile for a moment, imagining this to be my daughter, Sunshine’s leg (we co-sleep in the same bed). I squeeze it a couple of times, but the texture feels off. It's too soft, with no hint of bone underneath, so that’s when I finally open my eyes. And look into the eyes of a snake. Black and glittering in the soft glow of the nightlight, they stare at me, while I pinwheel my arms like a deranged windmill. Terrified, I push the blanket away and grab Sunshine. She wakes up and starts howling because she wants her soft toy. And that’s when it hits me.


Somehow toy manufacturers here in the US, thought it would be an amazing idea to make and sell weighted 5 feet long toy “worms”. If that doesn’t sound gross enough, they gave the toy an ugly green color with shiny black eyes and A DAMN RED FANG! Essentially an unholy union of a worm and a snake. Some asinine relative considered this a wonderful birthday present and Sunshine was besotted with it, much to my dismay.
Heart still beating too fast, I come back to the bed. Sunshine whoops with joy and cuddles with the snake which in turn grins at me insipidly, mocking my sweaty palms. I make a face and use my phone to prod its tail away.


You know how kids lose toys all the time? So that actually happened. Honest! Hand over my heart, the very next day, the snake somehow went missing. I search everywhere [nowhere]. Sunshine is inconsolable for a whole of 30 minutes. I feel bad [guilty], until she remembers she has four different Peppa Pig soft toys to play with. I give my husband the cold shoulder for a few hours until I realize he has no control over how he acts in my dreams.


All is well now. Kids happy, husband slightly confused but pleased that I wasn’t snapping at him anymore. Sipping some hot chocolate, I contemplate the moonlit world outside my kitchen window. If you squint really hard, if you are sufficiently suspicious, you might have spotted a green tail peeking out of the trash can.
Shaking my head, I smile and think, “The kids really need to be more careful with their toys,”. 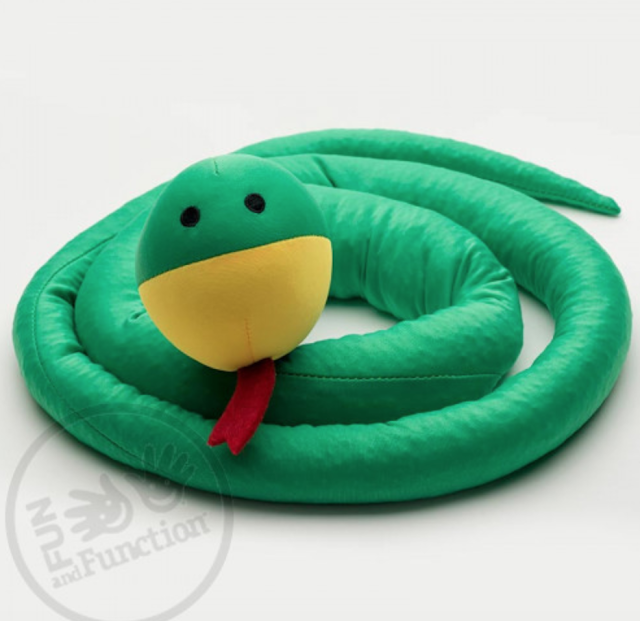